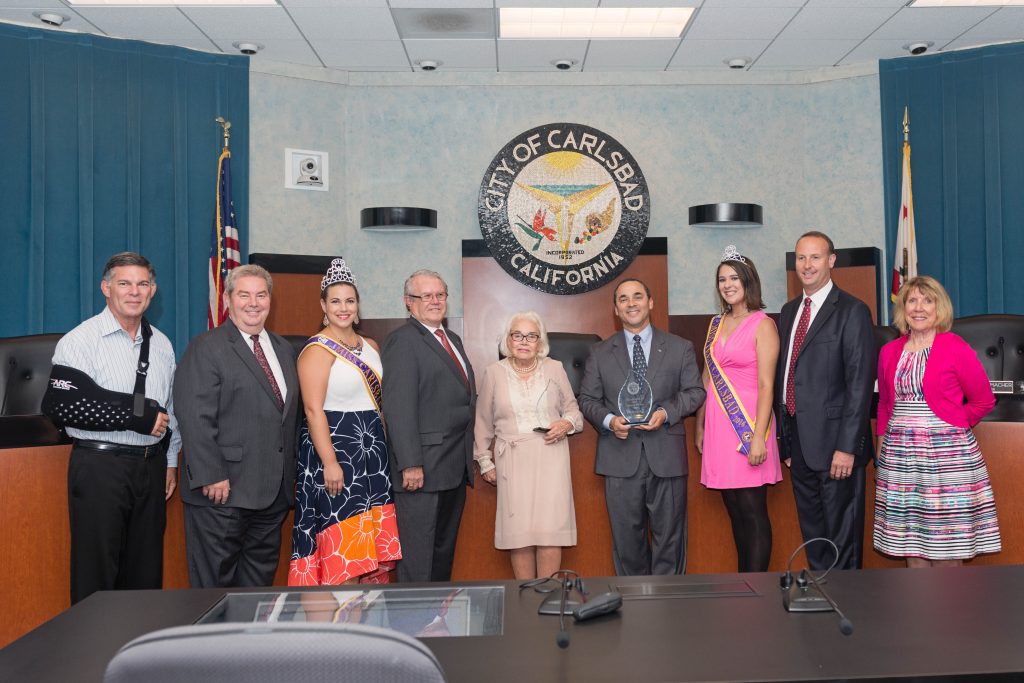 Carlsbad honors Citizens of the Year

Longtime Carlsbad volunteers, Zona Murray and Phil Urbina, were presented with the Citizens of the Year award by the City Council for their commitment to improving the city in July.

The annual award is more than 40 years old and honors community members who have given their time and energy toward the civic improvement, beautification and betterment of the City of Carlsbad.

Murray has lived in Carlsbad for well over four decades and bought one of the city’s oldest houses built by Judge Alexander Beller in 1894. The dilapidated farmhouse near Buena Vista Lagoon qualified as a historic building and Murray decided to restore the old home.

“I always liked old things,” Murray said. “The city said don’t tear it down, and I could have left it but no one would want to look at it.”

The 16-year restoration project entailed raising the structure to build a foundation underneath and modernizing the house to make it livable. Today her daughter’s family lives in the historic treasure.

Murray’s energy has had a wide reach, with projects and initiatives that benefit not only Carlsbad residents, but community members throughout North County.

Murray fondly recalls playing an instrumental role in helping the City of Poway and State of California acquire 400 acres that became the heart of the Blue Sky Ecological Reserve in the late 1980s.

Another of Murray’s favorite causes was Soroptimist International. She was active in the program for 23 years and was recognized by the United Nations for her involvement.

Closer to home, Murray initiated a program that awards art scholarships to high school students in Carlsbad and Oceanside, distributing $60,000 since 1999.

Murray also gives “Boot Strap Scholarships” to Murray High School seniors who have shown the most progress in a short amount of time. The high school, part of the Vista Unified School District, is named for Maj. Gen. Raymond Murray, former commandant of Marine Corps Base Camp Pendleton and Murray’s late husband. Raymond and Zona Murray were married from 2001 until the general’s death in 2004.

Murray co-wrote “High Pockets, The Man, The Marine, The Legend,” Gen. Murray’s autobiography, and she works to help fund research into post-traumatic stress disorder, in honor of her late husband.

Meanwhile, Phil Urbina, a former chairman of the Chamber brings to mind Mother Teresa’s admonition that “if you can’t feed a hundred people, then feed just one.”

“I’ve always found great joy in helping people,” Urbina said. “My kids were raised in the Christmas Bureau, helping out by loading cars and delivering food.”

Urbina owns Cousin’s Signs with his wife, Kathy, who has been his partner in many causes. In 2007, Phil and Kathy Urbina were awarded the Chamber’s Community Leadership Award.

Urbina joined the Carlsbad Hi-Noon Rotary Club in 1986 and shortly thereafter became active in the annual Carlsbad Rotary Oktoberfest, which has raised more than $1 million for local charities over its many years. He has served on the Rotary Club’s’ Oktoberfest board since 1989, and has been the event’s co-chair since 2013.

Urbina’s service has always placed a strong emphasis on youth. He has been active with the Boys & Girls Club of Carlsbad for many years, including a stint as president from 1992 to 1993.

When his children were small, Urbina became active in the La Costa Youth Organization, as a board member, manager and coach from 2001 to 2012. He served as president of the youth organization from 2009 to 2012 and coached teams for the Carlsbad Lightning Soccer Club from 2002 to 2007.

Urbina said that helping others is more than a calling. It’s a way to connect with yourself and he feels better by helping those in need.

“Carlsbad is such a great community because of so many people who volunteer in so many areas,” Urbina said. “It’s amazing how many volunteers there are here.”