Citing a 233% increase in collisions involving bikes and e-bikes since 2019, the City of Carlsbad today declared a local state of emergency. This action will immediately increase attention and resources on a range of solutions including infrastructure, safety, enforcement and a focus on safe driving behavior education.

City Manager Scott Chadwick has redeployed resources from the city’s police, fire, transportation and community education departments to develop immediate actions to be presented to the City Council Aug. 30, followed by a comprehensive plan on Sept. 27.

“The exponential increase in ridership, especially among young people, has significantly changed how people are using Carlsbad’s roads,” said City Manager Scott Chadwick. “In addition to adding miles of new bike lanes, we’ve passed new laws, promoted awareness and ramped up enforcement. Despite these efforts, we continue to see collisions, including two tragic fatalities within the past 17 days.” 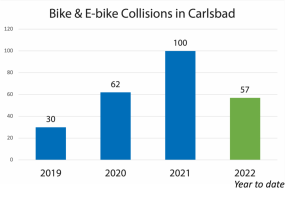 According to estimates by the National Highway Traffic Safety Administration, U.S. roadway deaths rose 10.5% in 2021 and an additional 7% during the first three months in 2022, the highest number for the first quarter in two decades. Further, the increase in deaths is due to speeding, impaired or distracted driving and other reckless behavior.

The official declaration covers the safety of bicycles, e-bikes and other motorized devices, which could include electric scooters and motorized skateboards.

“This is an issue that affects every single member of our community, and it will take all of us working together to make our streets safer,” said Chadwick.

The City of Carlsbad first started to see an increase in bike and e-bike riders during the COVID-19 pandemic. In December 2020, the City Council approved an overarching plan to add and expand sidewalks and bike lanes while slowing down cars on streets throughout Carlsbad. The city’s traffic engineers have completed several projects and have more in the planning stages. In June 2022, the City Council directed staff to further expedite streets projects in the current fiscal year’s budget. However, with hundreds of miles of city roads, the plan will still take many years to complete.

In April 2022, the City Council approved new, Carlsbad-specific rules for e-bike riders, which provide Carlsbad police officers with more enforcement options. The new rules include a diversion program where minors have the option to complete an e-bike safety course after their first offense.

The City of Carlsbad has programs, tips and reminders to help the community be safe on our local roadways. Especially as students and their families begin another school year, together we can improve traffic safety.