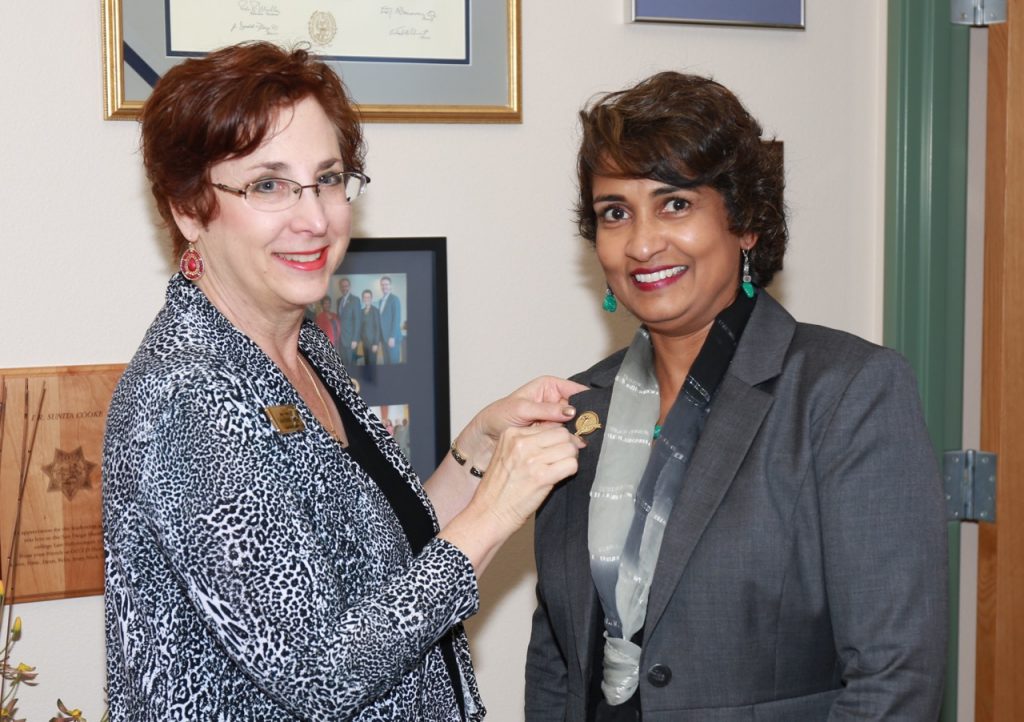 The nonprofit, Leap to Success, named MiraCosta College Superintendent/President Sunny Cooke the inaugural recipient of its “I Leap Award,” which is aimed at recognizing extraordinary women who have impacted their community.

“I’m honored to be recognized by Leap to Success, which is working with community partners to impact the lives of women who have been victims of domestic violence, suffered through homelessness, or faced other seemingly insurmountable challenges,” said Dr. Cooke. “It is a great organization that is making a difference, and I am truly humbled.”

Dr. Cooke epitomizes the American dream. Born in Lucknow, India, Dr. Cooke was just five when she immigrated with her family to the United States.  Because of Indian immigration laws at the time, the family came to their new country with just $8 per person in their pockets and whatever they could carry in their luggage. Their first home was a YMCA camp outside of Dallas. Dr. Cooke’s mother was a nurse, and was recruited by Parkland Memorial Hospital in Dallas. Dr. Cooke’s father was an English literature instructor at Lucknow Christian College.

A community college educator and administrator for more than 20 years, Dr. Cooke has served as superintendent/president of the MiraCosta Community College District since Jan. 2, 2015. She came to the coastal North County district from Grossmont College in El Cajon, where she served as president from 2007 to 2014. Dr. Cooke is a board member of the Carlsbad Chamber of Commerce, the San Diego Economic Development Corporation, Biocom, and the San Diego Workforce Investment Board.

“Since only 26 percent of colleges are led by women, we are inspired by Dr. Cooke as someone who has broken the gender barrier by becoming the president of two local community colleges,” Bristol-Smith said. “As an immigrant from India, whose family had only $40 on arrival, Dr. Cooke’s success shows us that someone from humble beginnings can become successful and be a role model for women. Dr. Cooke’s story inspires us to believe that anything is possible through hard work, education, and determination.”

Dr. Cooke, since 2012, has represented all of the San Diego and Imperial Counties community colleges on the Workforce Investment Board and is now the liaison with the State Chancellor’s Office regarding economic and workforce development efforts at the regional and state level. She is the chair of the statewide “Doing What Matters for Jobs and the Economy” campaign, a community college and industry collaboration making inroads in closing the skills gap.