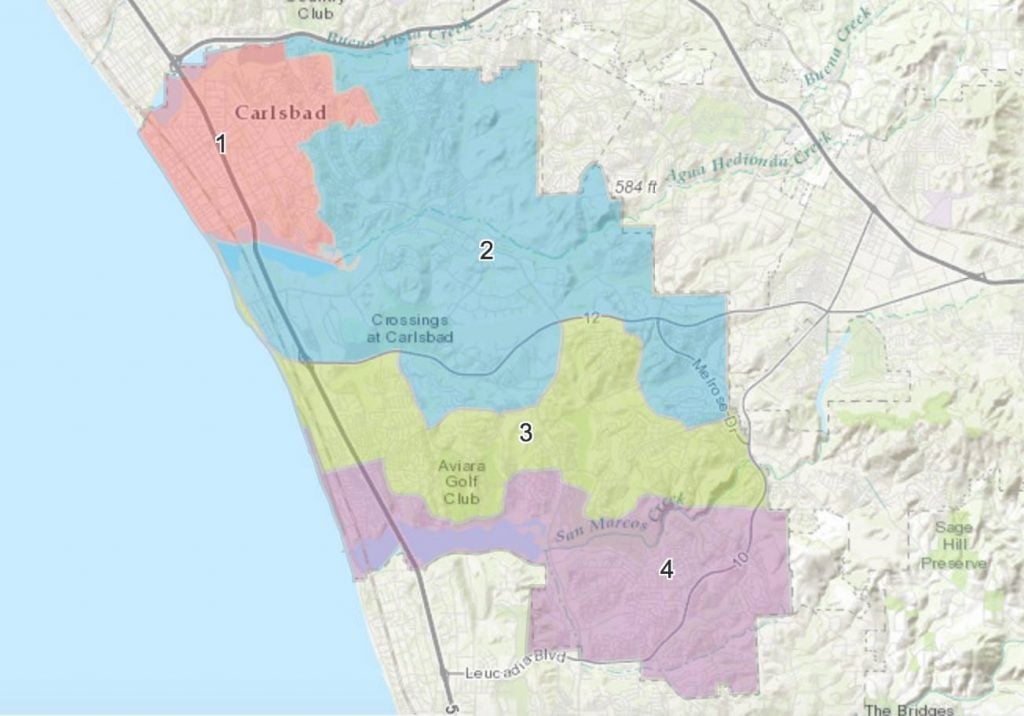 By Deb Beddoe
Chairman of the Board
Carlsbad Chamber of Commerce

The Carlsbad Chamber of Commerce Board of Directors has held an interest in the topic of voting districts as the City of Carlsbad begins shifting toward district council elections instead of at-large voting.

In case you are not familiar with the issue, there is a movement in California, largely brought about by one attorney in Malibu alleging Carlsbad’s election system violates the California Voting Rights Act. Other North County cities including Oceanside, Vista, San Marcos, and Poway are facing similar challenges.

In 1964 Carlsbad residents approved a council comprised of one mayor and four council people. Therefore, in Carlsbad, there will be four separate districts, each with its own candidates, and voters will vote only in that district.

Demographers and residents used the most recent census data to determine how the districts will be defined. Many of us think of Carlsbad in four quadrants defined by Palomar Airport Road and El Camino Real. But the reality is that those quadrants might not be the best demographic demarcations for the city. Many of the decisions the council has to decide are based in the coastal corridor, which doesn’t affect the NE & SE quadrants. The final district map, referred to as the Cohen-Flock 1 map, is named after the two residents that created it. The Cohen-Flock 1 map configures the city in an east to west division that allows all four districts to touch the coast, which affects most of the decisions.

If you are wondering what this topic has to do with Carlsbad business, the answer is “a lot.” The redistricting is focused specifically on “voters” but the fact is that many of the business owners and workers in Carlsbad companies do not live and vote in Carlsbad. The Carlsbad Chamber of Commerce may not represent “voters” but we do represent a constituency that adds almost $70 million in revenue to the City’s General Fund annually. This represents almost half of the $144 million in revenue. As the demographers study their data, Carlsbad businesses are not in the equation at all. As a Chamber, we need to be part of the process to assure that the best interests of Carlsbad businesses are represented.

Much of the business prosperity in Carlsbad comes from a broad spectrum of political views from our council people who are working together toward common goals. The Chamber would like to see that tradition of cooperation continue to thrive as we enter an era of major political changes in the coming years. Time will tell as to whether the City will remain a cohesive community or feel more like four communities. The Board of Directors of the Carlsbad Chamber of Commerce will continue to strive to assure that the Business community has a voice.