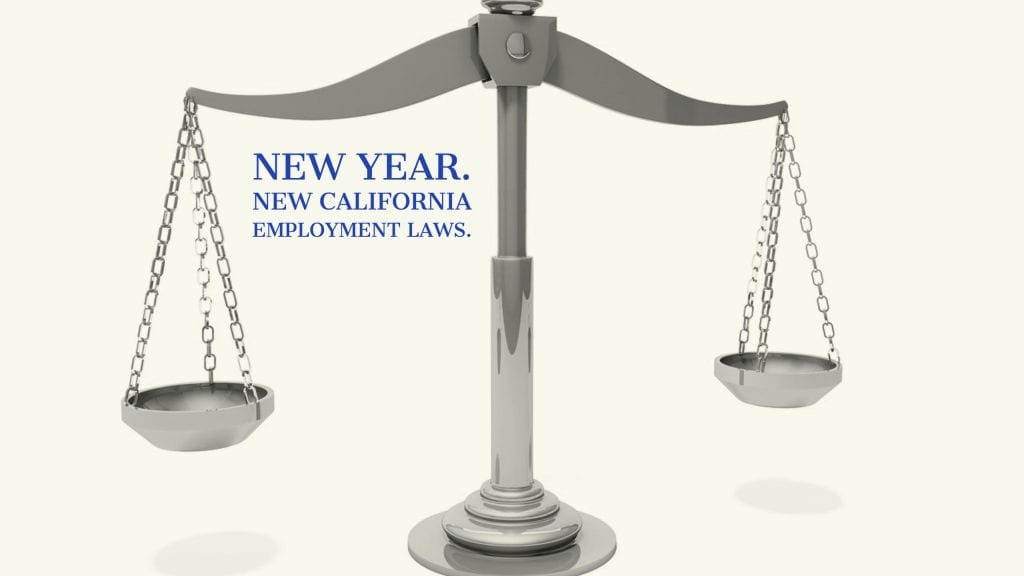 There are new laws taking effect in 2017 that will have an impact on your business. Employers need to be aware of significant changes in key areas, such as the state minimum wage. Other new laws make small changes or may relate only to specific industries. Unless specified, all new legislation goes into effect on January 1, 2017. This year, many bills feature delayed or phased-in implementation.

Itemized Wage Statements
AB 2535 amends Labor Code Section 226 and clarifies that employees who are exempt from the payment of minimum wage and overtime are not required to have their hours tracked and logged on an itemized wage statement, commonly referred to as a pay stub.

Challenges to Minimum Wage Violations
Under AB 2899, employers who contest a Labor Commissioner ruling that they failed to pay the minimum wage must post a bond equal to the unpaid wages, excluding penalties.

Overtime for Private Elementary or Secondary School Teachers
Under AB 2230, private school employees will need to meet a new minimum earnings test that will look at the comparable salaries offered to public school teachers in the school district or county, rather than the state minimum wage. This legislation is effective July 1, 2017.

Licensure Requirements for Hair Salons/Nail Salons
AB 2437 requires any establishment that is licensed by the Board of Barbering and Cosmetology (BBC) (e.g., hair salons, nail salons, estheticians, etc.) to post a notice regarding workplace rights and wage-and-hour laws by July 1, 2017. The Labor Commissioner must create the model notice. Failure to post the notice will result in a fine.

Temporary Services; Wages
Under the Labor Code, employees of a temporary service employer must be paid weekly, regardless of when the assignment ends. AB 1311 applies the weekly pay requirement to security guards employed by private patrol operators who are temporary services employers. This urgency legislation took effect on July 25, 2016.

All-Gender Restrooms
AB 1732 sets a new requirement that, beginning March 1, 2017, all single-user toilet facilities in any business establishment, place of public accommodation or government agency must be identified as “all-gender” toilet facilities.

Immigration-Related Protections
Employers are required by federal law to verify an employee’s eligibility to work using the Form I-9 process. Under federal law, it is unlawful for employers to ask for more or different documentation than is required by the Form I-9, refuse to accept documents that appear genuine on their face or engage in other types of document abuse. SB 1001 makes this type of conduct unlawful under state law as well.

Definition of Employee
AB 488 revises the definition of employee under California’s Fair Employment and Housing Act (FEHA) to authorize an individual employed under a special license in a nonprofit sheltered workshop, day program or rehabilitation facility to bring an action under the FEHA for any form of prohibited harassment or discrimination.

Human Trafficking
AB 1684 authorizes the DFEH to receive, investigate and prosecute complaints from victims of human trafficking. The DFEH can bring civil actions on behalf of these victims.

State Contracts and Anti-Discrimination Certification
AB 2844 requires those who bid, propose or renew a contract of $100,000 or more with a state agency to certify their compliance with the Unruh Civil Rights Act and FEHA.

Leaves of Absence and Benefits
Several new laws relate to employee benefits and leaves of absences.

Private Retirement Savings Plans
SB 1234 approves the California Secure Choice Retirement Savings Program (SCRSP), which is a state-run retirement plan for private-sector workers. Specific prerequisites must be met before the SCRSP can be implemented, and it may be some time before we actually see this program up and running.

Juvenile Criminal History Information
AB 1843 prohibits employers from inquiring into an applicant’s juvenile convictions or using such convictions as a factor in determining any condition of employment.

Criminal Background Check — Ride Sharing Services
AB 1289 requires a “transportation network company” (think Uber and Lyft) to conduct local and national criminal background checks for each participating driver and prohibits the use of drivers with certain types of convictions.

Driving
AB 1785 reaffirms the general ban on using wireless electronic devices while driving, but amends existing law to authorize drivers to use their hand to activate or deactivate a feature or function of the device with a single swipe or tap, as long as the device is mounted so as not to hinder the driver’s view of the road.

Smoking
A package of bills was signed earlier this year that extend the ban on workplace smoking. These rules took effect June 9, 2016.

Public Works and Prevailing Wages
A number of new laws relate to public works and prevailing wages. Employers who provide services or construction work on public works projects for the government or public-sector entities must pay the prevailing wage, which is usually significantly higher than the minimum wage.