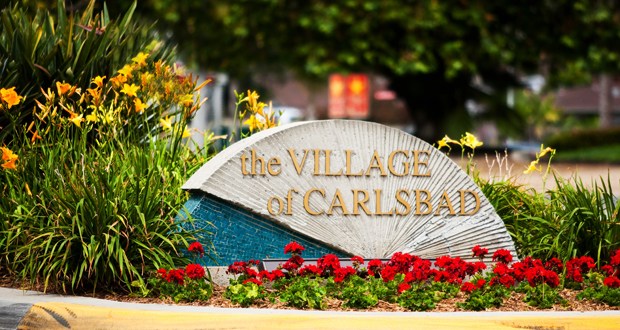 New Face in the Village & Barrio

The City of Carlsbad continues to invest heavily in revitalizing our two oldest neighborhoods, the Barrio and Carlsbad Village, as we enhance the neighborhood character and economic vitality of these historic communities.

For the first time, the city has hired a village manager who will work closely with stakeholders in the Barrio and Village on public and private projects that will shape these communities’ long-term growth and sustainability.

Claudia Huerta, our new village manager, brings a wealth of urban planning experience to this position, having worked extensively in New York City and Los Angeles, and consulted on international projects.

Huerta hails from San Diego’s San Carlos neighborhood, where she graduated from Patrick Henry High School, and earned her bachelor’s in economics and Spanish literature from Columbia University in New York City. She was later employed in the university’s facilities department, where she worked closely with local residents in planning the university’s expanded campus and capital campaign projects.

“I got to work on over 10 different projects over three years, and worked with the community on the general plan for campus expansion in West Harlem,” Huerta said. The community was originally skeptical of the university’s plans, because past projects had bypassed the community. Huerta helped to represent residents’ concerns as the project moved through the development process.

A Californian at heart, Huerta then took a job with a Los Angeles construction firm, where she worked with clients to develop community-friendly projects.

She returned to Columbia to earn a master’s degree in urban planning, and consulted on a number of international projects, including Rio de Janeiro’s Olympic Games-related development.

California’s allure remained strong, however, and Huerta returned to her home city, and has accepted Carlsbad’s new position as village manager.

“I have wanted to get back into urban planning and economic development and this will bring together a lot of my previous experience – urban design, creating urban spaces, working with local businesses, and working with different agencies and local community stakeholder groups,” she said. “I’m excited to be a part of the team that will help the city grow and thrive.”

The city has prioritized revitalizing the Village and Barrio and is in the process of writing a new draft of the Village & Barrio Master Plan that will regulate land use and carry out the community’s vision for the two historic neighborhoods. It has been shaped by a great deal of public input and will be submitted to the City Council this autumn.

The master plan will include design guidelines for the two neighborhoods, and part of Huerta’s job will be to support technical city staff and work closely with the Carlsbad Village Association and other groups to assure that the community is aware of and engaged with the plan’s approval process.

“How do you make a better connection between the beach, the Barrio, the restaurants and all the other attractions in Carlsbad’s downtown?” she said. “How do you make it a place where residents feel like it’s their Village, and where visitors enjoy going?”

Huerta began in the position on June 19, and the term is for two years. She is bullish on Carlsbad’s future.

“I’m excited to get to know Carlsbad in a more intimate way, to know all the existing stakeholders and be a resource,” she said. “I’m excited to see how I can help make it more of a destination. It’s a great place and I want to take it to the next level.”