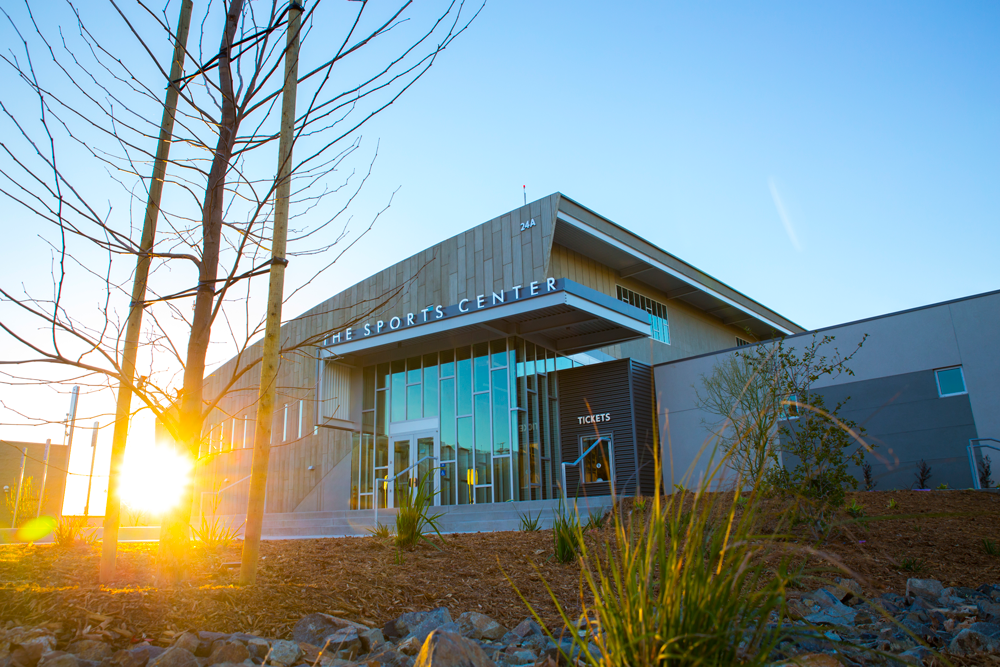 Cal State San Marcos was missing just one element for a fully operational Department of Athletics. The University officially checks that off its list with the grand opening of The Sports Center on Sept. 1.

The 25,000-square-foot facility is the new home of Cougars athletics. After five years of playing off-site home games, CSUSM’s women’s volleyball team and men’s and women’s basketball teams have a place of their own to host games on campus.

“Now that The Sports Center is complete, we are complete as a department,” said Jennifer Milo, CSUSM’s director of athletics.

The Sports Center includes seating for 1,400 spectators, a ticket office, student-athlete locker rooms for all sports, coaches’ offices and a student-athlete lounge, among other features. It is certain to be a rallying point of pride throughout North County.

“It’s really exciting for our student-athletes to see all the school spirit that this will bring,” said Andrea Leonard, who is beginning her sixth season as the Cougars’ women’s volleyball head coach. “Having this home gym is going to bring people in the community together even more.”

Construction was originally slated to take 18 months, but PCL Construction completed the project well ahead of schedule.

“We were sitting in on these planning meetings for so long, at least two years, so for PCL to give us the keys and say, ‘Here you go’ was a special feeling,” said Morod Shah, associate director of athletics, facilities and operations, and director of The Sports Center.

The extra time allowed the Department of Athletics a chance to test all of the building’s features before hosting its first official athletic event on Sept. 1: the women’s volleyball team’s season opener against La Sierra.

The Sports Center has been open for tours for students, faculty, staff and prospective students for a few months, and the facility hasn’t disappointed.

“The number one thing people say when they walk in the gym is, ‘Wow, I didn’t know it was this big!’ It doesn’t do it justice until you walk in and you see the massive size of the facility,” Shah said.

When CSUSM applied for NCAA Division II membership in 2014, building athletics facilities suitable for that level became a top priority.

The University learned in July 2014 that it had been accepted into the three-year NCAA membership transition process and the California Collegiate Athletic Association, which includes 11 other California State Universities and UC San Diego. CSUSM learned over the summer that the NCAA Division II Membership Committee approved the athletics program to move to its third and final year of transition, and CSUSM is expected to be a full NCAA Division II member by fall 2017.